Eden is a playable character in The Binding of Isaac: Four Souls. They were unlocked in the "The Chest" stretch goal in the Kickstarter Campaign.

Unlike other characters, Eden gets to choose their starting card. When the game begins, the person playing as Eden looks at the top 3 cards in the treasure deck. Once they chose one of these cards, it becomes their starting card, and gains the "Eternal" buff. This is a reference to The Binding of Isaac: Rebirth, in which Eden starts with random items (and hairstyles) every time.

Due to the fact that he has no starting card, a strategy for Eden cannot be made. You'll just have to hope you get a good card (eg. Mom's Knife ) out of the three you get to select from. 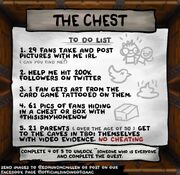