The Binding of Isaac: Four Souls Wiki
Register
Don't have an account?
Sign In
Advertisement
in: Decks 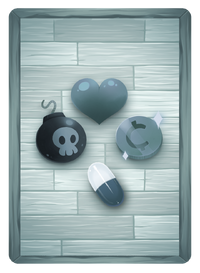 The loot deck is one of the three decks in The Binding of Isaac: Four Souls.

Coins can be played to gain ¢ by playing the card.

Trinkets can be played to gain the card as a passive Item.

Basic loot, tarot cards and special loot can be played to activate the effect written on the card.

Your Loot cards must be hidden from other players, unless a certain Treasure Card says otherwise. Whenever a card says "Loot #', it's always referring to drawing Loot Cards